I totally enjoyed their meatball and roasted vegetable apps, and their unique thin-crust pizzas are AWESOME!!

Open Tues-Sun at 4pm.  Come as you are and enjoy some delicious food, cold drinks, and great atmosphere! Located at 713 Coleman Blvd.  Visit Tysroadside.com for menu options, and Ty says “We look forward to cooking for the neighborhood!”

Visit Tysroadhouse.com for their menu and more!

It’s back!  And I a so excited for this exciting event!

Oct 1st from 5-6:60pm at Red Drum Restaurant!  Super fun trivia all about our neighborhood and surrounding areas. 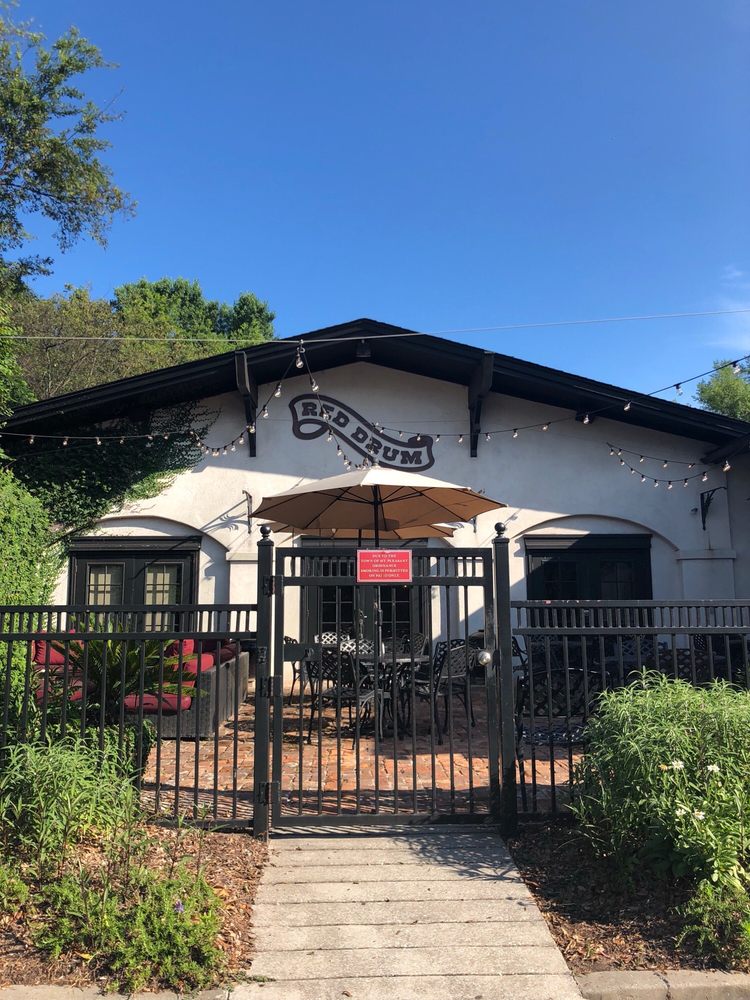 Out of Hand is excited to expand and add “Ooh! Happy Day!” to our business.

Ooh! Happy Day is a “marriage” (pun intended) of our retail space, and our wedding coordinating business, Ooh! Events. While you will find beautiful bridesmaids gifts and wedding welcome bag inspiration, you can also meet with our talented florists to get inspirations flowing for your event or wedding! The rest of the store also received a facelift: Out of the Garden now offers a wider variety of gifts, including exclusive Charleston leather goods, delicious smelling candles, and beautifully potted plants. Ooh! Beautiful now resides in the front of Out of Hand. It is now easier to see beauty products and get a little makeup “touch up” while trying on a new outfit! Things that haven’t changed? Unique products, smiling faces, and our commitment to ensure our customers have the best experience shopping with us!

Located at 113 Pitt St, or visit online at ShopOutOfHand.com

I find that getting out and exercising during the Dog Days of Summer is less grueling if I have something pretty to look at. There is nothing like a good view to make the time pass! I have thoroughly been enjoying the new access to the Shem Creek Park from the Shem Creek Bridge. It has quickly become the highlight of my runs!

This adorable single family home in Fox Pond (Old Village/ Old Mt. Pleasant neighborhood) is 1500 square foot, 3 bedroom, 2 bath home and features a red metal roof and charming front porch. The private back courtyard is fully fenced and has an outdoor storage building, garden area (with rich soil) and operational compost bin. And you cannot miss the mature live oaks, tangerine and fig trees in the yard. Inside, there is a spacious living/ dining area with a gas fireplace featuring a re-claimed wood mantle and stone surround. Fully upgraded kitchen with Apsen White granite, subway tile back splash, custom cabinets, deep drawers, and stone floor. Eat-in area with mercury glass light fixture and view of backyard. Bright sun room provides additional living space. Nice sized bedrooms, one of which is oversized and could double as a large game room or home office. This home is move in ready and a must see!  You will love the Old Village/ Old Mt. Pleasant neighborhood and all it has to offer!  www.JackieKellyRealEstate.com

Martine Wolfe-Miller, Communications Officer for the Town Of Mount Pleasant’s Christmas Parade has provided some excellent details for this Sunday’s Parade!  See you there!  For more info, click here. 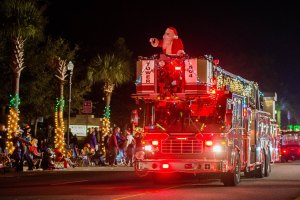 The fun begins with a spectacular tree lighting and fireworks display at Moultrie Middle School at 5:30 p.m., immediately followed by the parade that starts at Pelzer Drive and ends at Camellia Drive just before Chuck Dawley Blvd.

“Our community does an amazing job of getting everyone in the spirit with incredibly designed and beautifully lit floats,” said Special Events Planner Nicole Harvey. “We are thrilled to welcome back the Wells Fargo Stagecoach along with many other local favorites.”

This year’s Grand Marshal is former Town Council member and Mayor Pro-Tem Thomasena Stokes-Marshall. Judging the floats will be Ann Magwood, Cara Fowler and Mary Huffman, three women who are pillars in our community.

Extensive security planning has been done and safety measures both seen and unseen will be in place throughout the event. Mount Pleasant Police ask participants to be aware of their surroundings and report anything that seems suspicious to one of the many uniformed officers present: “If you see something, say something!”

Spectators can utilize the Mount Pleasant Police Department’s smart phone app to send pictures or video of any suspicious persons or behavior during the parade. “Within the application users can click on Parade Report and send us any pictures or video of something that seems out of place,” says Inspector Chip Googe. “We still want you to call 911 so that we can have officers on the way but this will give us a little more information on what we are responding to.”

The Christmas Light Parade is a Lowcountry favorite for people of all ages and can be best enjoyed by following these easy tips:

When does the parade start/end?

The Christmas Light Parade starts immediately following the tree lighting at approximately 5:35 p.m. The parade typically ends no later than 8:00 p.m., depending on where you sit on the route.

Will there be road closures and how do I get where I need to go?

When will Coleman Boulevard re-open?

No cars are allowed on closed roadways until all pedestrian traffic is clear. In addition to Coleman Boulevard, this affects Chuck Dawley Blvd. and Ben Sawyer between Rifle Range and Sea Island Shopping Center. Police and Public Services work hard to open the road as efficiently as possible with public safety being the primary concern. All roads are typically re-opened around 8 p.m. Vehicles will be directed to turn south as the gradual re-opening occurs to prevent traffic backup behind the end of the parade as it travels north until all floats have finished unloading at Sea Island Shopping Center.

Where is the best place to view the parade?

People line the sides of Coleman Blvd. and there are many great viewing areas from start to finish. There will be sidewalk seating along the parade route and there are a few bleachers set up in front of the Farmers Market Pavilion.

How about food? Can I tailgate along the parade route?

Yes. Tailgating at the Mount Pleasant Christmas Light Parade is a long-standing tradition! We encourage you to come early, settle in and enjoy the festivities with a cup of hot cocoa, apple cider, or other warm beverage. Keep in mind that there are many restaurants located on Coleman Blvd. Alcohol will be available for sale inside restaurants and bars, but not on the street.

Where should children go if they get separated from their group?

Families and parade participants should have a safety plan in place. Instruct children to find a Town official, Firefighter or Police Officer on duty. Please go to the stage by the Farmers Market Pavilion in front of Moultrie Middle School or to the Lost Child Tent at Regions Bank on the corner of Chuck Dawley and Coleman Blvd. (Sea Island Shopping Center) for help.

Can I fly my drone at the event?

In the interest of public safety, Coleman Blvd. including the entire lineup area and parade route are deemed a No Drone Zone during the event.

Is the parade rain or shine?

Yes, the parade will only be cancelled in the case of extreme weather that would jeopardize safety. In case of hazardous weather on parade day, the public should visit the Mount Pleasant Christmas Light Parade & Tree Lighting Facebook page, the Mount Pleasant Police Twitter feed, or tune to Y102.5 FM for information. If the Parade is cancelled, it is not rescheduled. No announcement means the show will go on!

Will there be public restrooms?

Lit port-o-lets will be available in the lineup area between Metto Coffee and Provincial Circle and in the parade viewing area at the East Cooper School District Office near Moultrie Middle School. Public restrooms are available at Shem Creek Park.

We are still in need of music groups to perform during the event.

Congrats to Cathy Guerry for correctly answering the question! Yes, my logo was designed to mirror the sign at the Pitt Street Pharmacy!

And I must say a special THANK YOU to Corie Hipp who was the graphic designer that created the logo! If you are in need of a fresh, new logo, Corie is the one to make it happen! Be sure to check her out at CorieHipp.com and tell her Jackie sent you!

I am super excited to introduce my new logo! What’s up with it, you ask? It is fresh, new, colorful and tells the world that I am committed to being your Village Connection!

And let me tell you… there is nothing RANDOM about this new logo. It did not “just happen.” It is very specific BY DESIGN!

When I look around the Old Village, there is one iconic thing that pops out in my mind, and my Logo is a mirror of this item. What is it? Do you know? Be the first person to email me the Old Village Icon and you will win a Cassina Tote bag! Jackie@TheCassinaGroup.com

I am so excited to bring you my newsletter, The Village Connection Online! There is no better way to stay connected with our neighborhood, watch Real Estate Trends, learn about local business owners, share stories, and learn about upcoming events! Well, you get the idea… all things OLD VILLAGE!!! Please feel free to send me pictures, share OV stories, and more, I am happy to spread the word about what makes this neighborhood so special!

Mark your calendar for the Old Village May Day Block Party & Market!

WHO?  Everyone is invited to this fun filled event!  Please help spread the word.

WHERE?  We will be closing off Hibben Street from Coleman Blvd. down to Whilden Street.

WHY? To showcase the people and things that make the Old Village so special!   As you know, in 2009 our economy was struggling, so the First OV May Day Block Party was created to help business owners gather, get creative, and network in new ways.  The event was a huge success and provided an opportunity to find valuable resources right in our own back yard.  And it is time to do it again!

MORE INFO TO COME, SO PLEASE HELP SPREAD THE WORD.  If you know of an OV business, artist, musician, etc, who would like to participate, please have them contact me ASAP.  Jackie@TheCassinaGroup.  I am thrilled to be involved in this event, it is going to be great!  Brought to you by Jackie Kelly,  your Village Connection along with The Cassina Group.